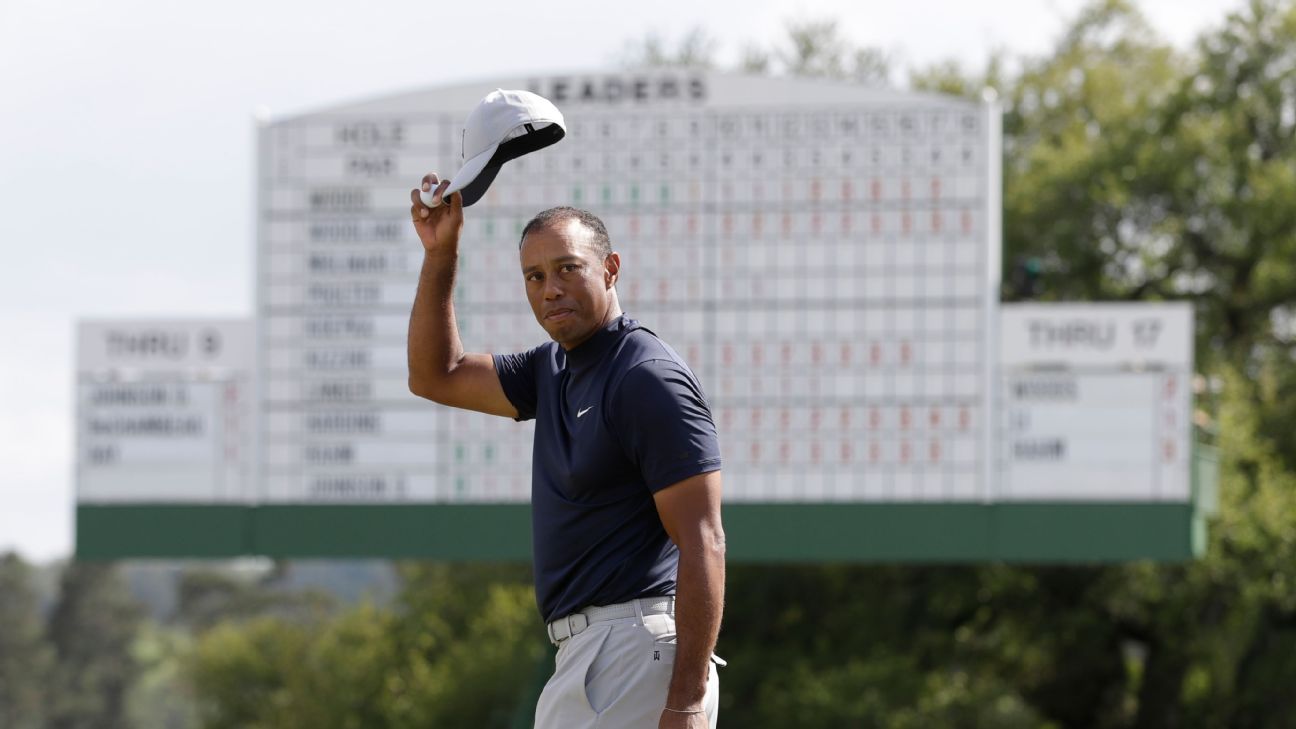 Blowing out the candles on a cake, such a seemingly innocuous activity, might have been a more arduous chore than any of us could know for Tiger Woods — and that wasn’t that many birthdays ago.

We tend to take things for granted, even now after an incredible year that saw Woods win his fifth Masters and his 82nd PGA Tour title, and go 3-0 as a player while also captain of the winning U.S. Presidents Cup team.

Even his world ranking, which hovered in or around the top 10 all year, now has him sixth. And despite missing dozens of tournaments because of injury over the past 10 years, he will close the decade as the player who stood at No. 1 the longest.

Just two years ago, none of this was imaginable, the impact of his spinal fusion surgery unknown to him or, really, anyone. Considering the positive end to 2019 for Woods, expectations will be sky high in 2020; he’ll be listed among the favorites going into the majors and a record-setting 83rd PGA Tour victory is seemingly a foregone conclusion.

It is amazing what a stretch of good health means to Woods, because when feeling good, he is still among the best. But as we saw on more than a few occasions in 2019, a stretch of cold weather, or lack of preparation due to back soreness, can make him look very ordinary.

Looking back, you can break down 2019 into four distinct areas:

Woods played in five tournaments prior to the Masters, skipping the Arnold Palmer Invitational because of neck stiffness. That was cause for concern just five weeks before the Masters, following what appeared to be a nice start to the year — a tie for 20th at the Farmers Insurance Open, a tie for 15th at the Genesis Open and a tie for 10th at the WGC-Mexico Championship.

A tie for 30th at the Players Championship was deemed OK, as Woods looked good coming off the neck problem. And then he got to the quarterfinals of the WGC-Dell Technologies Match Play, finishing tied for fifth in his best finish of the year.

Still, Woods had not completed any stroke-play event closer than 8 shots to the leader.

It all came together at Augusta National, and for the first time, Woods came from behind after 54 holes to win a major championship. Still trailing by 2 shots stepping to the 12th tee, Woods found himself tied after Francesco Molinari found Rae’s Creek and made a double-bogey. Woods led outright for the first time with a birdie at the 15th, then extended it to 2 shots with another birdie at the 16th.

A final-round 70 was good for a 1-shot win over an all-star cast that included Brooks Koepka, Dustin Johnson, Xander Schauffele and others.

What will remain forever is the reaction. The outpouring of support Woods received in victory. The emotion he showed in hugging his family and friends behind the final green. And then so many of his competitors waiting by to congratulate him. It was a victory that reverberated beyond sports.

“I had never, ever in all my years of going there and all my years of watching the Masters … I had never heard chanting at Augusta National,” Woods said this fall of the continuous “Tiger, Tiger” bellowing that followed him from the 18th green all the way to the clubhouse and beyond. “I get goose bumps talking about it still. The chanting. The amount of support I had. So many people that wanted to see me do it.

“It was special to have that kind of support, that kind of backing. I was going up against the best players in the world. I was trying to come from behind for the first time [to win a major]. And that support was so important.”

As he walked toward the scoring area, Woods slapped hands with Mike Thomas, the father of Justin Thomas, who was among those to greet him. Past champions Bubba Watson, Trevor Immelman, Zach Johnson and Bernhard Langer were there, as were Koepka and Schauffele and Ian Poulter. It was as memorable as the golf itself.

Woods was ill and clearly not prepared for the PGA Championship at Bethpage, where he missed the cut with scores of 72-73. He had his best showing post-Masters at the Memorial with a tie for ninth, but he was never a factor at the U.S. Open, where he needed a final-round 69 to tie for 21st.

He then took a family vacation to his mother’s homeland, Thailand, and it will always be fair to wonder how much that took out of him or whether he even injured himself while there. Because Woods looked awful at Royal Portrush, shooting his worst score of the year (78) in the opening round on his way to a missed cut. In his next start, at the Northern Trust, Woods withdrew after one round citing an oblique injury. And then he ended his 2018-19 season with a tie for 31st at the BMW Championship.

In six starts after the Masters, Woods was barely competitive. He looked like a guy who sold his soul to win his 15th major.

That is why Aug. 20 turned out to be a pretty important day for Woods. It is when he had what was described as routine arthroscopic surgery on his left knee to clean out cartilage. Turns out the knee had been bothering Woods for most of the year.

“It just kind of deteriorated over the year,” he said. “It affected the way my back was feeling and my practice schedule. I’ve been down this road. That was my fifth [knee] operation. It’s been nice to have it moving again and not have it catch and lock up. A lot of wear and tear over the year. It’s been stressed out for a very long time, and it was nice having it cleaned up.”

The results were remarkable. Woods, who hadn’t played competitive golf since the BMW Championship and only began practicing about a month before his trip to Japan for a skins game and the Zozo Championship, opened the tournament with three straight bogeys but still bounced back to shoot 64. He shot 64 in the second round and went on for a 3-shot victory, the 82nd of his PGA Tour career to match the record set by Sam Snead.

He was then in contention until the final holes at the Hero World Challenge, finishing fourth, before leading the U.S. team to victory at the Presidents Cup, where he looked like the best player among the 24, going 3-0 in his matches.

During the course of the year, Woods missed two cuts, both at majors, bringing his PGA Tour total to 20 — still less than the number of missed cuts by Jordan Spieth (26) and Justin Thomas (27). His nine missed cuts in majors is still surpassed by his number of victories (15).

His win at the Zozo was the 32nd of his career by 3 strokes or more and gave him 93 wins in Official World Ranking events for his career.

As 2020 begins, Woods will set his sights on preparing for his Masters defense, with a likely first start at Torrey Pines followed by four or five more tournaments leading up to the first major. In the back of his mind will be the world rankings, which will determine whether he plays in the Olympics over the summer.

All of it remains remarkable to consider as another birthday offers a reminder of the difficulty of the tasks accomplished and those still to be attained.