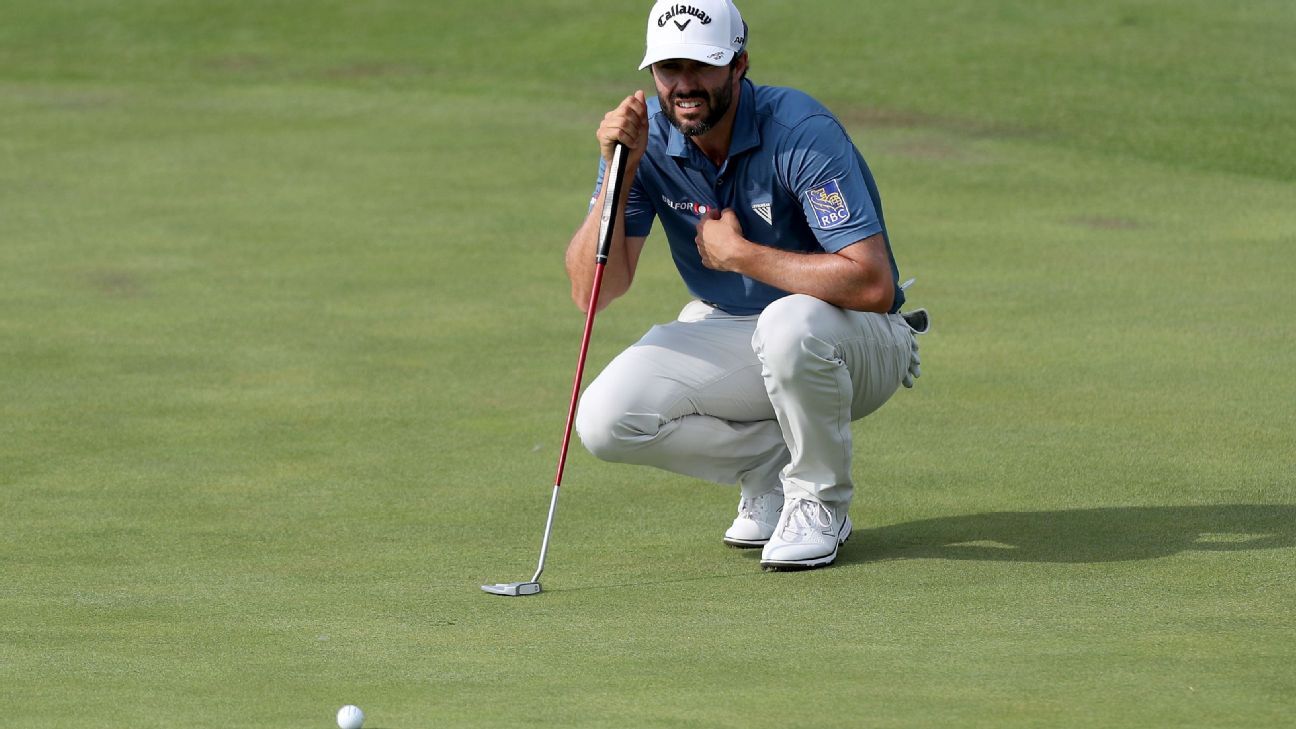 BLAINE, Minn. — Adam Hadwin missed the weekend cuts in his last three tournaments, continuing a disappointing stretch as he dropped to 120th in the FedEx Cup standings.

The 33-year-old Canadian has put himself in position to get back in contention for the playoffs with a strong run at the 3M Open.

“I drove it really well today,” Hadwin said. “Wasn’t in any trouble, hit a lot of good quality iron shots. Again, fat sides of the hole, I gave myself opportunities. My speed control’s been really good. It’s been as stress-free a 65 as you’re going to have.”

Hadwin and Armour were two of few players in the afternoon to go low as wind started to play a role following a hot and humid morning with heat indexes reaching 100 degrees.

Second-ranked Dustin Johnson bogeyed the 18th hole after putting his tee shot in the water and missed the cut. He shot 72 to finish at even par. The cut was 2-under.

Staying in contention this weekend would be a boon to Hadwin and Armour.

Hadwin, who finished fourth in the inaugural 3M Open in 2019, was just inside the cut for the FedEx Cup playoffs. The top 125 in the standings make the playoffs. Armour started the tournament 135th.

“I think the biggest thing coming in this week, I’ve just been a little bit more committed to the process and less on the outcome,” Hadwin said. “Certainly playoffs, maintaining status, all that stuff has probably been creeping in a bit in the last little bit and I probably got away from some of the little details that make this game happen for us. So, I’ve gotten back to that these last three rounds and it’s worked out a lot better for me.”

Hadwin, famous for shooting a 59 at the CareerBuilder Challenge in 2017, had a 69 on the final day of the British Open and followed with a 67 on Thursday in Minnesota. His only PGA Tour win was the Valspar Championship in 2017.

“I’m trying,” Armour said. “We’ll worry about the points later. I don’t feel like I’ve really had as bad a year as 135 sounds. I missed five or six cuts by a shot, so you’re always kind of around that cut line and I just fell on the wrong side of it a few times. That’s what kind of gnaws at you because you feel like, man, it’s not that bad, so maybe I should be higher, but you’ve got to go out and get it done and we’re just trying our hardest right now.”

Vegas was able to finish in the dark on Thursday, but it wasn’t without incident as his approach on the 18th hit the top of a hospitality tent. The ball was found and he was given relief and finished with a birdie and a tie for the lead.

One of four players at the 3M Open slated to play in next week’s Olympics, Vegas kept his strong recent form going Friday. The Venezuelan was among the leaders before a bogey finish on the ninth hole, which is playing as the toughest on the course.

Vegas has tied for 11th or better in three of his last five tournaments.

“I feel I like I’m keeping the ball in play pretty well, giving myself enough chances, making a few putts, which is always good,” Vegas said. “The wind is blowing and it’s kind of that intensity that is a little bit annoying, especially some of those shots with so much water around this place, but played solid. I can’t really complain too much.”