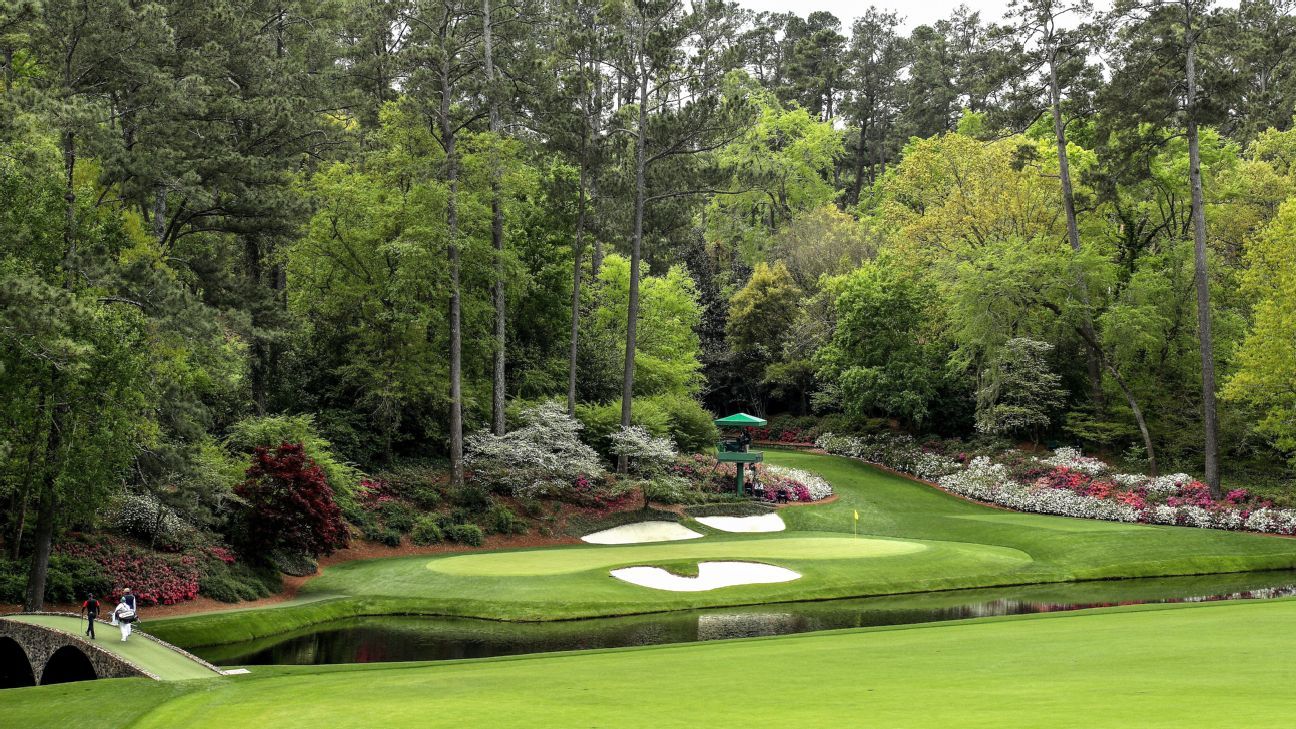 Augusta National Golf Club opened to its membership on Monday, an annual fall occurrence that typically occurs without much fanfare. It is a private club, after all. Other sports are in full song, particularly football. Normally, the annual Masters tournament is still six months away, the golf calendar filled with a bunch of sleepy event this time of year.

Nothing, of course, is normal about 2020. Augusta National was closed as usual for the summer, but shut down more than two months early due to the coronavirus pandemic. The Masters Tournament was lost in the bedlam, just a month prior to its start, and eventually postponed to November.

That seemed long ago.

Now we are a month away from the first fall Masters, and the potential for a wonderfully different look at a revered, historic place in the game that will see Tiger Woods attempt to defend his 2019 title 19 months later on the hallowed Georgia grounds that will be without spectators.

Here is how things stand with another four weeks to go until the third major championship of 2020:

Some stunning photos surfaced recently on Eureka Earth, which took aerial shots of Augusta National in late September. Except for the greens, the entire place was brown. Many fairway areas appeared to be shaved bare. Bunkers had liners but not all had sand.

And this is, well, par for the course.

The fairways and rough at Augusta National have Bermuda grass, the predominant grass that typically prospers in the warm, summer months. As the club is closing in late May, the Bermuda pushes out the rye grass overseed. It is what you would expect of most courses in the South.

But because Augusta National is closed in the summer, there is no need to maintain the Bermuda. The greens — which are bent grass — are kept in top condition, but the rest of the course is not in the traditional sense, unless there is some sort of work being done or changes made.

But, magically, some 10 days later, those same photos showed a green golf course.

Each September, Augusta National puts down a rye overseed that is meant to keep the grass green through the fall and winter months. And it’s how the course appears in April for the Masters.

With less time to be ready for a November Masters, it will be fascinating to see how Augusta National plays. Will the turf possibly be thinner than usual? Will it play faster? Could there be cooler mornings? All of this is to be discovered.

The field is set at 96 players and has been since the postponed tournament dates were announced in April. Before play was halted due to the pandemic, there were just two remaining ways to qualify for the Masters for those not otherwise invited: to win the Players Championship, Valspar Championship, WGC-Dell match Play or Valero Texas Open; or be among the top 50 in the world on the Monday following the Match Play.

The Masters then went with the most recent published top 50 in the Official World Ranking. Four players qualified who were not otherwise exempt: then-No. 44 Collin Morikawa, No. 45 Scottie Scheffler and No. 47 Christiaan Bezuidenhout are making their Masters debuts. Graeme McDowell also snuck into the top 50 and will play his first Masters since 2016.

Daniel Berger was well outside of the top 50 in the world when golf was halted following the first round of the Players Championship. He won the first tournament back, the Charles Schwab Challenge in June, and he has add six top-25 finishes since to move up to No. 12 in the world.

Certainly Berger has a case to be in the Masters field given his world ranking. So do Viktor Hovland and Harris English. Both have moved into the top 50. But barring some last-minute change, they won’t be at Augusta National.

Imagine the uproar if Morikawa had not snuck into the top 50 in the spring? He has since won the PGA Championship, which by itself would not have qualified him for this unique Masters because the August tournament was after the Masters cutoff.

Those still trying to qualify for the 2020 Masters missed out on four potential winning possibilities and the ability to move into the top 50.

But Augusta’s stance is solid: Qualification for the 2020 Masters ended in March. Anything that occurred after that applies to the 2021 Masters, which will be just five months later.

The field size is always an issue with the Masters. It rarely goes over 100 players. Last year, it was 87. With far less daylight in the fall, getting the field through 18 holes each day is an issue that likely led to a decision to not add any more players.

An issue unlike any other Masters. Instead of daylight saving time, the Masters will operate on standard time. That means approximately two hours less daylight per day. It will be dark around 5:30 p.m. ET. That means, possibly, the need for a two-tee start on Thursday and Friday.

And having to start the first round of the Masters on the 10th tee and facing Amen Corner early in the morning is not an ideal situation.

Could everyone play off the first tee?

It’s possible, but it would be extremely tight. Last year, the final tee time was at 2 p.m. To get in before darkness, the last time can really be no later than about 12:30 p.m., if you consider threesomes are going to take five hours.

But … if you started at 7 a.m. and went in 11-minute intervals, you could have 32 tee times of three players each that run through 12:39 p.m. Delays of any kind would mean the last groups won’t finish. But Augusta National might be willing to take that chance.

Also to be considered: the honorary starters, Jack Nicklaus and Gary Player. Do they tee off in virtual darkness before 7 a.m.?

Without a one-tee start, the Masters would need to go to a two-tee start with a morning and afternoon wave. You would have eight groups of three players tee off the first and 10th tees in the morning, and then another wave of the same in the afternoon.

After 36 holes, there will be a cut to the top 50 and ties, which should allow for normal one-tee start in twos for the third round. But due to CBS’ NFL commitment on Sunday, the fourth round is scheduled to end by approximately 2:30 p.m ET, allowing time for a sudden-death playoff if necessary. That will again mean starting players off both tees.

Woods will have one more start prior to the Masters, as he has entered next week’s Zozo Championship at Sherwood Country Club. It is the tournament he won a year ago — his 82nd PGA Tour title, tying Sam Snead for the most — when it was played in Japan.

How Woods looks at Sherwood in Southern California is anybody’s guess, but if past results are an indicator then there should not be much in the way of expectations for Woods.

He missed the cut at the U.S. Open last month, meaning that during an 11-week stretch between the BMW Championship in August and the Masters, Woods will have played just six competitive rounds.

It’s the least he’s played leading to a Masters since he took nine weeks prior to the 2015 tournament, where he tied for 17th. In 2010, Woods didn’t play all year until the Masters and tied for fourth.

Leading to his 2019 victory, Woods played two weeks prior at the Match Play and a total of four times in eight weeks prior.

After his victory at the Zozo a year ago, Woods was ranked sixth in the world, which is where he ended 2019. He has dropped to 24th.

How Bryson DeChambeau plays Augusta National should be fascinating to watch. He’s clearly not interested in navigating his way around the course. The U.S. Open champion said he’s been working on putting a driver with a 48-inch shaft into play specifically for the Masters. Many wondered how his newfound long game that included some 50 pounds of weight gain would fare on a difficult course. Well, DeChambeau was the only player under par at Winged Foot, and he won by six.

The losses due to the pandemic

The Augusta National Women’s Amateur was canceled, as was the Drive, Chip & Putt Championship. Both of those pre-tournament staples played on the weekend prior will have to wait until April.

What is unclear is if Woods will be able to host a Champions Dinner in the clubhouse, on the patio — or at all. So far, no word. Same for the annual Par 3 Contest, which if it is played would undoubtedly be missing all of the spouses, kids and grandkids who frequent the event.

Augusta National’s term for the fans or spectators who attend the tournament won’t be of much use this year — as there won’t be any. That’s a huge hit to the club’s bottom line (for the first time, merchandise will be made available for a short time online to contracted ticket holders), despite its enormous resources.

And it’s a huge blow to the tournament that in part has become famous worldwide for the cheers and groans that echo among the huge pine trees, making for one of sports’ great spectacles.

This time, we’ll hear the echo of club meeting ball, birds chirping and maybe a smattering of applause from volunteers or club members who are permitted onto the course.

But those ear-shattering roars will be missing. And they will also be missed.

Woods, who many times has commented on how the support of the spectators played such an important role in his victory in 2019, unknowingly foreshadowed what this year might look like way before anyone could imagine what the world would endure.

As he exited the clubhouse on that Sunday night in April after his victory, the sun had yet to completely drop underneath the clouds, a far different setting than the champion would encounter in the late-night darkness.

“I have never seen the golf course empty like that,” Woods said. “I was out there with [children] Sam and Charlie and I said, ‘This is what Augusta National is like.’ You see the beauty of it. The rolling hills. The perfect grass. It was immaculate.

“It’s so different when nobody is out there. That’s when they started to understand how beautiful the place is.”

It sure is, and perhaps this unique Masters will offer the opportunity to appreciate that even more.

Luck of the Draw: Luiten vs Harding
Golf Channel’s telecast of the 2020 CJ Cup to include live odds for the first time
PGA Tour integrating odds into upcoming telecast
CJ Cup 2020 DFS expert picks: These favorites stand out in a week of unknowns
Tour Edge Hot Launch 521 iron lineup looks to take game improvement “as far as you can”