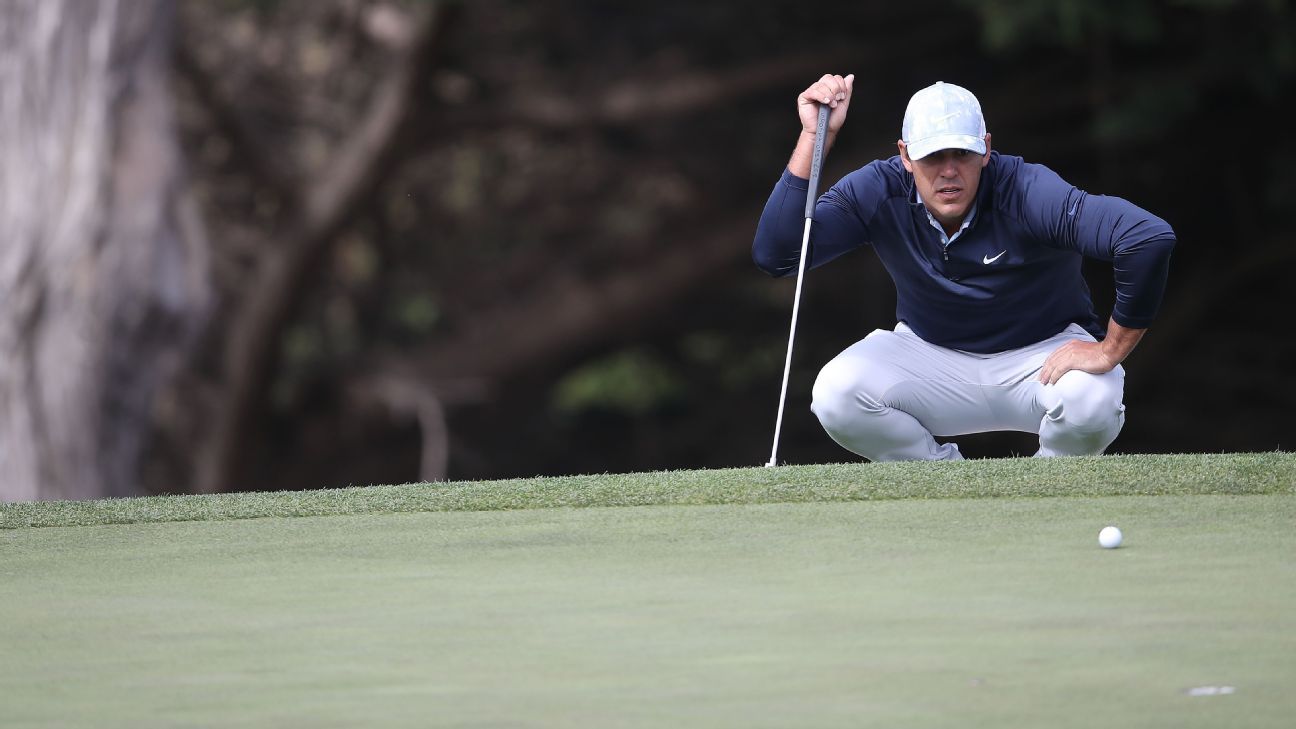 The question hung in the air all week: What would the 2020 PGA Championship, the first major in 13 months and first without fans, look and feel like?

On Thursday, we got the answer.

Different, but still intriguing. Just look at drama on Thursday — from Woods grinding out a 2-under 68 to Bryson DeChambeau snapping the head off his driver with one of his monster swings to low scores at TPC Harding Park.

So while different, the first act has the first major in 13 months set up for some drama. Here is everything to get you set for Friday’s second round.

Brooks Koepka is trying to win the PGA Championship for a third consecutive year. He started slowly, bogeying the 11th, his second hole of the day after starting on No. 10. Then it clicked, the realization that this is a major and his stage.

He rattled off four birdies to go out in 3-under 32 and followed it up with 1-under 34 on the front. His 66 puts him in pretty good company — which actually already includes him.

Lowest opening round by defending PGA Champion (since 1958)

Koepka would be the first player in the stroke-play era to win three consecutive PGA Championships. Walter Hagen won four in the 1920s, when the event was match-play format.

“It’s only 18 holes right now,” Koepka said. “I feel good. I feel confident. I’m excited for the next three days. I think I can definitely play a lot better, and just need to tidy a few things up, and we’ll be there come Sunday on the back nine.”

A good Day, a better weekend?

Sure, it’s only one day, and there’s a long way to go before someone is holding the Wanamaker Trophy on Sunday night. If history is an indicator, Jason Day has a chance. He has eight wins on the PGA Tour. In four of those, he had at least a share of the first-round lead.

It wasn’t hard to see this kind of start from Day, given his recent outings. He finished in a tie for seventh at the Workday Charity Open, T-4 at the Memorial and T-6 at the WGC-FedEx St. Jude Invitational.

“I feel like the momentum that I’ve had over the last three starts has kind of seeped into this week,” he said. “Every day I’m excited to go back to the golf course and play.”

That wasn’t always the case since golf returned from its three-month shutdown amid the coronavirus pandemic. Day missed three cuts in four events — and the one he did make the cut he tied for 46th — before this hot streak.

“I was struggling to get up and going, [thinking] ‘Oh, do I want to kind of put myself through this again?’ To be honest, I’m excited to get out and play every week now,” Day said.

Now, will his back — which has a history of acting up and won’t be helped by chilly conditions in San Francisco — hold up over four days? He had to withdraw earlier this year from the Arnold Palmer Invitational because of it.

The four featured groups for Friday’s second round:

Brendon Todd’s rise has been remarkable. He fought the full-swing yips, which nearly caused him to quit the game, to a pair of wins at the end of 2019. Since the return of golf, he has been in contention twice — at the Travelers and the WGC-FedEx St. Jude Invitational — before fading with closing 76s both times. On Thursday, he opened with 65, tying him with Day for the first-round lead. The 65 was his lowest round in a major and the first time he’s ever held at least a share of the lead in one of golf’s four marquee events.

“I don’t really compare rounds, but it was one of my better rounds,” Todd said. “I’m just going to try and try to take this momentum into the rest of the week and have some fun.”

But what happens next will be interesting. Since golf’s return, he has opened with a round in the 60s in all but one event — he shot 75 to start the Memorial. Last week, in Memphis, Tennessee, he raced out to a 64. But in each of the past four events, he’s shot 73 or higher in the final round. So how he manages the rest of this week, with a major title on the line, will be the biggest thing to keep an eye on.

I’ve obviously got to play better on Sundays,” he said. “My scoring average in 2020 [on Sundays] has not been good but it just something to work on.”

Sure, the golf course got a bit harder when the wind picked and the greens became a little firmer for the afternoon wave during Thursday’s first round. But there were low scores to be had. That much is clear from the host of red numbers.

“Conditionwise, the wind wasn’t up and it was a little warmer, so that was nice,” McIlroy said. “I felt like the course was there for the taking.”

Most rounds of 66 or better in majors history

Will it stay this way?

“I think with a lot of wind, the course will play different, different and difficult,” said Xander Schauffele, who opened with 4-under 66. “Not that it wasn’t hard [Thursday], but it’s going to be a lot harder to hit fairways [Friday] and we’ll be playing from a lot more rough.”

There was hope for Justin Rose once golf came back from the COVID-19 hiatus. He had missed three of his four previous cuts, including two in a row. His final round before that layoff was a second-round 77 at the Arnold Palmer Invitational. So when golf returned at the Charles Schwab Challenge and Rose opened with a blistering 63, there was hope that maybe he had figured something out while at home. He tied for third there and finished T-14 a week later at the RBC Heritage.

Then the problems started again. He missed three straight cuts coming into this week’s PGA Championship. It was so bad, he posted an 80 in the second round of the Workday Charity Open.

So where did Thursday’s 4-under 66 at Harding Park come from? And can he keep it up over four days?

“Listen, it’s not fun to not play great golf,” he said. “I’ve been tweaking my swing here and there trying to make a few changes to improve. Saw success right out of the gate, obviously after the quarantine period at home. I had a putt to force a playoff there [at the Charles Schwab] at Colonial. When I’ve played well, I get myself right up there but it hasn’t been consistent enough. I kind of built — 2017, 2018, probably the better years of my career, they were built on consistency. So I’m looking for that level.”