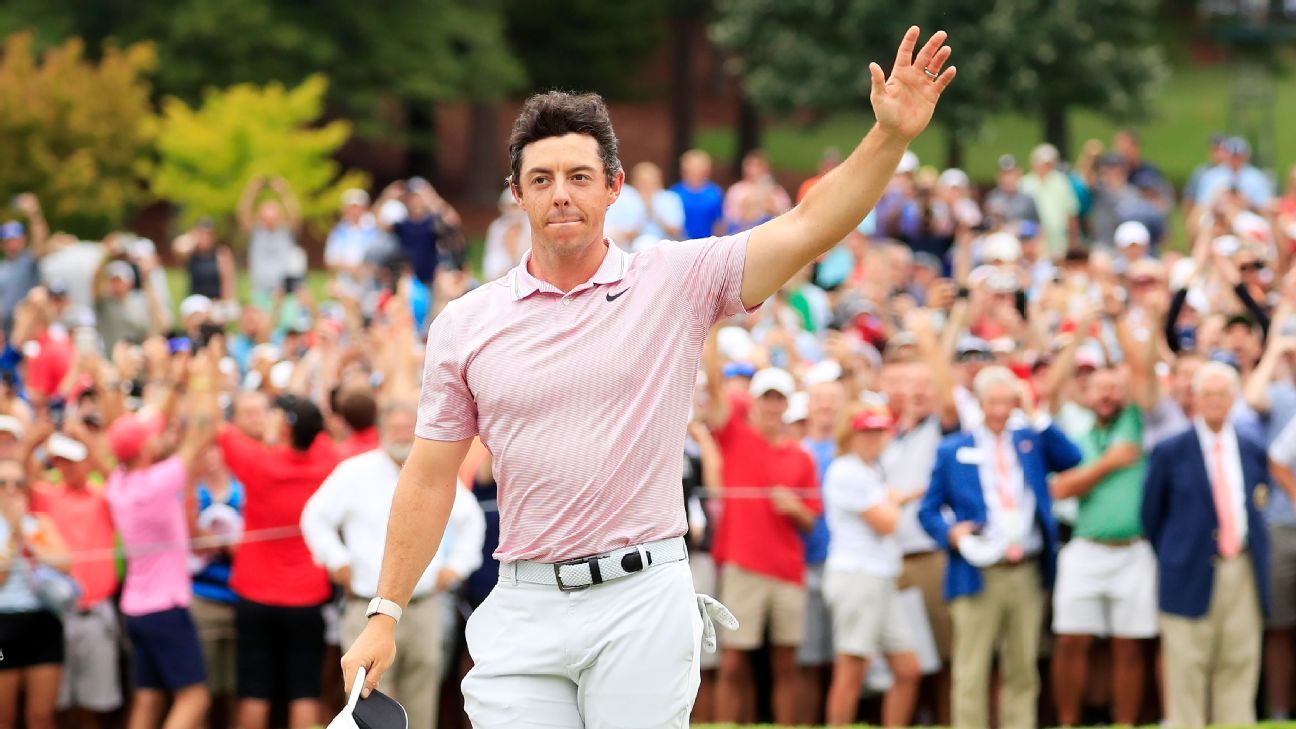 ATLANTA — As much as he later said he enjoyed being part of and witness to history a year ago at East Lake, Rory McIlroy didn’t much relish that final-hole walk. Fans rushing past him. That chanting and singing and hollering for someone else. The fleeting fear of being trampled.

It was a hollow feeling, one made worse by knowing McIlroy had far from his best stuff in the final round of the Tour Championship a year ago.

That was hardly the case on Sunday.

In another high-intensity battle, this one with the reigning and likely repeating PGA Tour player of the year Brooks Koepka, it was McIlroy who prevailed, beating back all challengers, shooting the lowest 72-hole score, and erasing all doubt about who is the FedEx Cup champion.

He also had his own final-hole coronation, not quite at the same level as the one he saw with Tiger Woods in 2018, but one that was quite satisfying nonetheless.

“I didn’t enjoy that walk last year like everyone else did,” McIlroy said after shooting a final-round 66 on Sunday to win by four strokes over Xander Schauffele. “I played terribly, I never took the fight to Tiger. Going up against the No. 1 player in the world [in Koepka this year], he got one over on me in Memphis, and I wanted to try to sort of get some revenge.

“To play like that alongside Brooks and get the win, win the FedEx Cup, yeah, it’s awesome. It’s amazing how different things can be in a year.”

So, too, is it amazing to think how McIlroy’s year would have been viewed without the victory on Sunday, which moved him to No. 2 in the world behind Koepka.

He has played 18 times worldwide, won three times, and posted a total of nine top-five finishes.

That’s a career year for most, but for McIlroy, 30, who has now gone five years since winning the fourth of his major championships, the inability to contend in any, plus the shortcomings in some other events in which he was near the lead, seemed to overshadow the success.

The missed cut in his native Northern Ireland at Royal Portrush in The Open was a particularly harsh blow, but then there he was a week later in the final group at the WGC-FedEx St. Jude Invitational in Memphis, only to be swept away in a final-round showdown that never materialized. Rarely does finishing tied for fourth feel so bad.

“I think it gave me just a little bit extra incentive,” McIlroy said. “Once I saw I was in the final group with Brooks, it just took me back to Memphis a few weeks ago, and I felt I learned a few lessons that day. I wanted to right some of the wrongs that I made that Sunday, and it was a good opportunity to do it.”

McIlroy didn’t contend down the stretch in the first two FedEx Cup playoff events, but fared well enough to enter the strokes-adjusted final event in fifth place, five strokes behind Justin Thomas. He then shot scores of 66-67-68-66 to win his second FedEx title, joining Woods as the only players to do so.

“He played great golf [on Sunday], pretty much mistake-free,” said Koepka, whose three straight bogeys on the back nine knocked him out of contention before he tied for third with Thomas. “He was impressive to watch. He put it in the fairway a lot, hit a lot of greens. The up and down he made at 11, that was pretty tasty right there. And then the way he finished it off was impressive.”

McIlroy and Koepka have seen a good bit of each other in recent months, and were grouped often of late due to their close proximity in the FedEx Cup standings. At similar ages, with the same number of major championships (four) but with wildly different backgrounds, perhaps a burgeoning rivalry is developing.

It certainly would be welcome, and both players welcome the challenge.

“I enjoy competing against Rory,” Koepka said. “He’s a tough competitor. He grinds it out, man. Even when you’re playing with him, it’s fun to watch him. Hopefully it stays that way.”

McIlroy has had his struggles at times, especially on the greens, where putting has often held him back. But he was 11th in strokes gained putting for the week. While that might not seem so great in a 30-player field, his domination in other areas certainly played a role in his victory. The list:

That will help you win a good number of tournaments.

On Sunday, he hit 11 greens in regulation — he hit 15 on Thursday — but made just two bogeys, although they made what appeared to be an easy victory a bit more tenuous before putting it away with a clutch par-saving putt on the 16th and then a birdie at the 17th.

That made the walk down the 18th fairway a sweet one.

“Yeah, it was pretty cool,” he said. “I turned to [caddie] Harry [Diamond] when we were walking down the hill after I’d hit my second shot. I said, this walk is a little more pleasant than last year, not running away from a stampede.”

Rory McIlroy cruises to a FedEx Cup victory, topping the runner-up by four strokes, and finishes his day with a birdie putt to clinch the win.

It was McIroy hearing the cheers and chants this time, a fitting end to the most consistent season of his career, but with plenty more to achieve.

Earlier in the week, McIloy was asked his views on the new FedEx Cup format, which saw players start with a score in relation to par based on their points total. He was beginning five back, with a regular tournament title no longer at stake, and expressed some well-thought reservations. He also wanted to reserve judgement.

“Come back to me on Monday,” he said.

No need, really. McIlroy shot the lowest 72-hole score, 267, 13 under par. He won for the third time this year and earned the most world ranking points in the field. And, of course, he pocketed the $15 million FedEx Cup bonus that goes to the winner.

It’s hard to find fault with any of that.