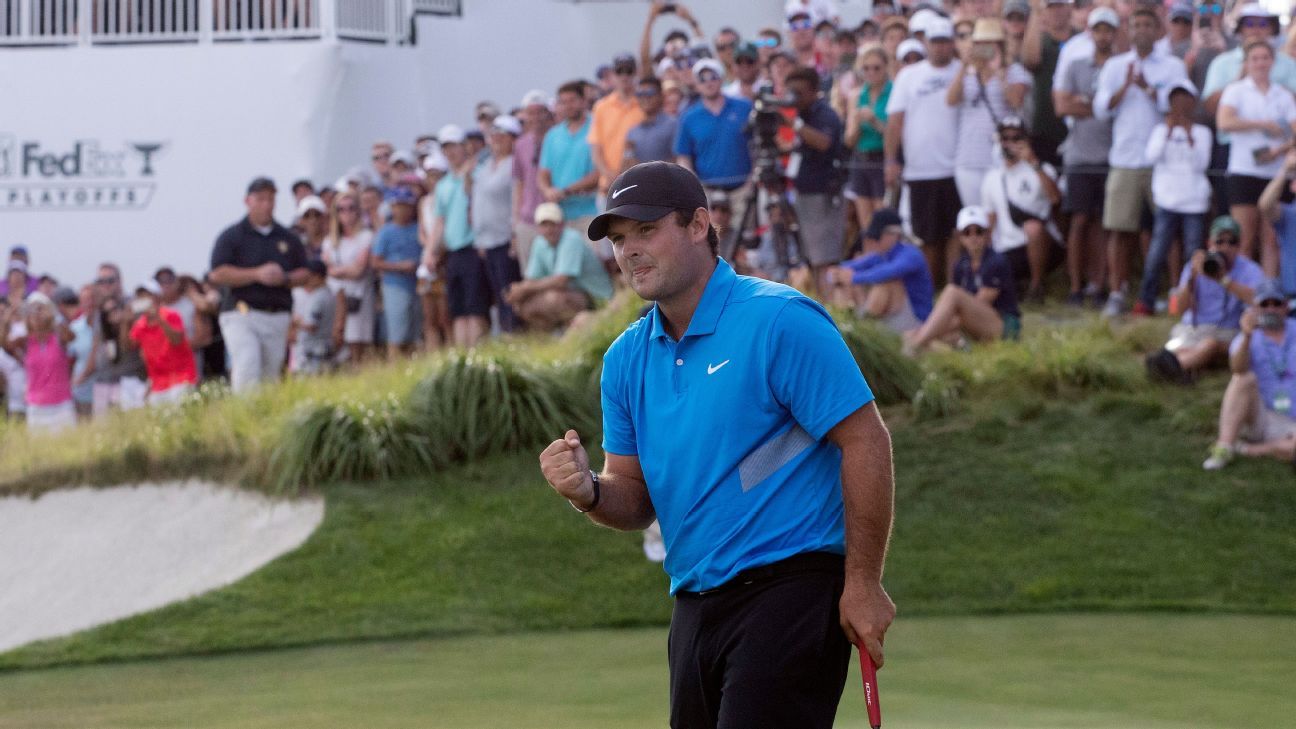 Reed fell behind early, was still two shots behind on the back nine at Liberty National and then rolled in three straight putts — one for par, two for birdies — that allowed him to overtake Jon Rahm and hold off Abraham Ancer to win The Northern Trust.

Reed closed with a 2-under 69 after a breezy afternoon in which a half-dozen players were in the mix on the back nine.

“It’s been a little too long,” said Reed, whose last victory was the 2018 Masters. “What better place to do it than here. It’s definitely a good time to get a `W.”

Reed had such mediocre results by his standards that he began the FedEx Cup playoffs at No. 50 and was only assured of two events. Points count four times as much in the playoffs, so the victory vaulted him to No. 2 in the FedEx Cup.

His place at the Tour Championship is secure. His odds of the $15 million prize increased greatly.

It still wasn’t enough for him to get in the top eight automatic qualifiers for the Presidents Cup, which will be decided after next week.

He finished at 16-under 268 and won for the seventh time in his career on the PGA Tour.

Ancer felt like a winner when it was over. He also played bogey-free over the final 12 holes, and his birdie on the 17th gave him hope. But his approach to the 18th came down below a ridge, and his long birdie putt to force a playoff went some 6 feet by the cup. He made that to finish alone in second, his best PGA Tour finish.

That was enough to send him from No. 67 to No. 8, with more perks that he could count.

Ancer is a lock to make it to the Tour Championship in two weeks, meaning he earns his first spot in the Masters. He wrapped up a spot on the International team for the Presidents Cup, making him the first Mexican in the event.

“When I finished, I was a little down because I didn’t get it done and I feel like I played good,” Ancer said. “But then getting all this news that I’m going to the Tour Championship, playing all the majors, going to Masters, all that, I was like, `Man, this is not too bad.’ I’m extremely happy, proud of the way I performance. I still obviously want that W, but really proud with all the boxes that I checked off today.”

Rahm wasn’t quite that happy.

He made a 12-foot birdie putt on No. 12 and reached the par-5 13th in two to set up another birdie, giving him a two-shot lead. And then it all fell apart for the Spaniard. He was on the wrong side of the green at the par-3 14th and three-putted for bogey from 50 feet. His tee shot narrowly found a bunker on the 15th, leaving him no shot at reaching the green, and he had to scramble for bogey from the thick grass behind the green.

Rahm never caught up, closed with a 69 and tied for third with Harold Varner III.

Reed began his move with a pitching wedge that caught the ridge at the back of the 14th green perfectly, sending it down to 8 feet for birdie. He was in thick rough right of the 15th green and looked certain to drop a shot when he holed a 10-foot putt for par. And then he pitched perfectly from 25 yards short of the 16th green to about 4 feet for birdie.

The top 70 in the FedEx Cup advance to the BMW Championship next week at Medinah, so there were other players who took home consolation prizes. One of the strongest bids belonged to Joaquin Niemann of Chile, who was in the middle of the pack and knew it would be close.

He slammed his iron into the turf on the 15th when he hit into a bunker, such was pressure on him. Niemann made a 6-foot par save there, drove the green on the 296-yard 16th hole for birdie, saved another par on the 17th and closed with a 66.

He tied for 30th, enough to move up four spots and get the 70th spot.

Varner might have had the biggest day in that regard. He started the PGA Tour postseason at No. 102, and while he came up two shot of his first PGA Tour victory, his tie for third moved him to No. 29. That not only gets him in the BMW Championship, he has a realistic shot at East Lake.

Adam Scott, who won at Liberty National the last time the FedEx Cup Opener was here, closed with a 65 and finished alone in fifth.

“This is an eventful Sunday,” he said after walking off the seventh green. That was his first par of the round. He got within two shots when he holed a bunker shot at No. 12 and eventually settled for a 67 that featured only 21 putts. Spieth moved from No. 69 to No. 44.

He tied for sixth with Rory McIlroy and Louis Oosthuizen, who each shot 69, and Brandt Snedeker, who had a 71.