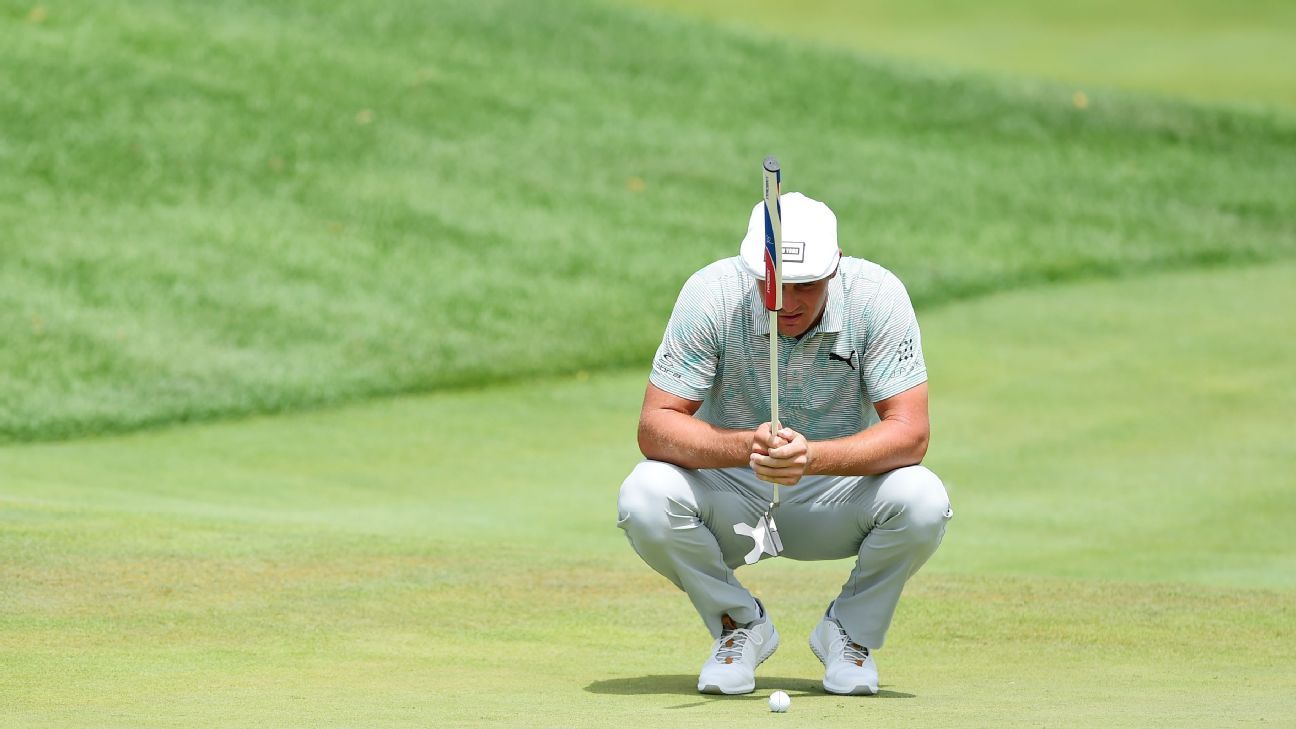 JERSEY CITY, N.J. — Bryson DeChambeau is getting considerable grief for slow play, but he wasted no time after his round at Liberty National on Saturday — not even waiting for a question — to push back on the criticism that enveloped him after two high-profile incidents during Friday’s second round of the Northern Trust.

DeChambeau, known for his scientific approach to the game, was met with derision on social media after video surfaced showing him walking 70 yards to the green and back before playing a shot on one hole, then taking more than two minutes to hit an 8-foot putt on another.

A five-time PGA Tour winner, DeChambeau often goes through a methodical routine before hitting a shot but was quick to talk about it after shooting 71 on Saturday, saying that he’s been “attacked” and that the criticism put him “in a bad light.”

“When people start talking to me about slow play and how I’m killing the game, I’m doing this and that to that game… that is complete and utter you-know what. That’s not fair,” he said.

anyone need a nap?

here’s DeChambeau pacing off a 70-yard shot which took over 3 minutes to hit (couldn’t post the entire video it took so long) pic.twitter.com/7A3Azeftyu

And this is why I have stopped watching the PGA Tour and lost interest. Such a shame that this goes unpunished and ruins the game. https://t.co/aXCgnoNJk6

DeChambeau contends he is not given credit for how fast he gets to the ball, and that it should allow him some leeway when he’s going through his routine before hitting a shot.

“Absolutely not,” said Justin Thomas, who played with DeChambeau on Friday and looked visibly annoyed in the videos circulating on social media. “Again, it’s not a time. The fact of the matter is you walk fast to your ball, we’re still a hole-and-a-half behind. It’s not working. You don’t get timed on how fast you get to the ball. If anything, I walk slower to my ball because then by the time I get there, my caddie’s there. But if you’re second or third to hit, I’ll get to my ball and get my yardage, so I’ll already have it. And that’s fine.

“But walking to your ball really quickly and not starting your process until it’s your turn, it’s defeating the purpose.”

Thomas said he wishes he had spoken to DeChambeau, that he didn’t mean to single him out because there are numerous others who are slow in the game.

“I like Bryson, but he’s a slow golfer,” Thomas said.

Others were not so kind. English golfer Eddie Pepperell was among those who took to Twitter to admonish DeChambeau for his actions, calling him an “unaffected, single-minded twit.” Thomas Bjorn was another who chided DeChambeau. Former PGA champion and current Sky TV announcer Rich Beem criticized the PGA Tour for not having a better policy.

Slow play in golf has been a problem for years, but it has seen a renewed vigor with recent comments from No. 1-ranked Brooks Koepka and Rory McIlroy, who proposed swifter penalties for the offenders. The PGA Tour’s current timing rules rarely result in stroke penalties. If a group is deemed “out of position,” all players in that group are put on the clock and required to play shots in 40 seconds. Players can also receive an extra 20 seconds under certain circumstances.

But at that point, the player still gets a warning if he has a bad time. It takes a second bad time for a one-shot penalty to kick in. Usually by then, the players are fully aware to not go over the timing restrictions. A fine structure is in place for a certain number of warnings and bad times throughout the year, but the names and amounts are not published.

Koepka said “it’s gotten out of hand” and McIlroy said “the guys who are slow get too many chances before they are penalized.”

DeChambeau said Saturday that he has received just one bad time this year, during the first round of the Memorial Tournament. His group was told it was out of position, and at that point put on the clock. Subsequently, he had a tricky shot and took more than one minute, 40 seconds to play it. That is a bad time, and he was warned.

“And I don’t believe (in that warning) one bit,” he said. “I’ve fought that till the end of the year.”

DeChambeau said he has no problem with slow players being called out, he simply thinks the total picture is not viewed in his case. He believes he is singled out because of his unique approach to the game (he plays with single-length irons) and takes numerous factors into consideration before hitting his shots. On the greens, he extensively uses a green-reading book and, before it was banned, used a compass to try and detect wind direction.

“People say things behind people’s back all the time,” he said. “And if they want to talk about it to my face, I’ll gladly explain the whole situation. Because the way the PGA Tour policy is now for pace of play is not good the way they define it. They define it as the amount of time it takes to hit a shot.

“But the problem is there are other people in the group and it takes time for them to do stuff. And when you look at the whole situation, and you look at the time it takes for me to get from one shot to the next shot and you add up those times for me to play the hole, I’m right on par.”

The PGA Tour has rarely issued the harshest way to deal with slow play — penalty strokes. It has happened on the rarest of occasions, mainly because the rules officials are loathe to hurt a player in that manner, as Slugger White, the tour’s vice president of rules and competitions, said in a recent Golf Digest interview.

“I hate slow play as much as the next guy,” White said. “But I can’t agree with the idea of hitting players with penalty strokes … Basically it means you (could have) drastically affected a guy’s life with the click of a stopwatch.”

Like Count Dracula, Phil Mickelson rises again
2 more LPGA events canceled due to coronavirus
Nick Taylor: His winner’s bag from the AT&T Pebble Beach Pro-Am
The evolution of the Genesis Invitational: What it means for the old L.A. Open to become an elevated-status event
The next level of the Golf Digest Hot List is this interactive quiz