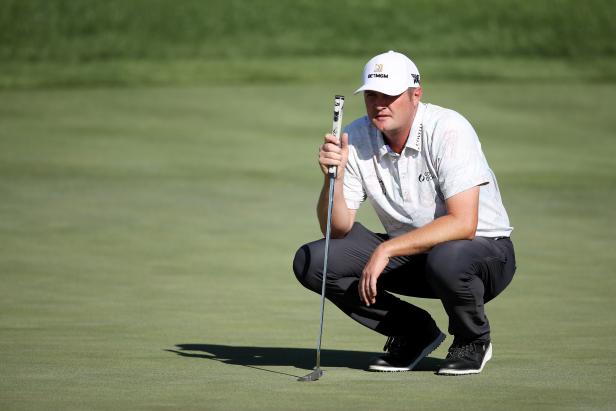 Jason Kokrak came into the CJ Cup @ Shadow Creek owning the distinction of being one of only nine players to have won $10 million on the PGA Tour without owning a win. In fact, he was only about $100,000 shy of earning the second-most of any player without a victory on the big tour. That all changed when Kokrak converted a nifty sand-save par on the par-5 16th hole with Xander Schauffele making his lone bogey on the same hole. Kokrak two-putted for birdie at the par-5 final hole to win by two over Xander Schauffele.

During a final-round 64 that featured eight birdies, Kokrak made four birdie putts inside 10 feet before rolling in birdie putts of 17, 20 and 17 feet.

Kokrak is known as one of the game’s longer hitters, but his work with his Bettinardi Studio Stock 38 putter that he first put in play at the BMW Championship helped him greatly to his first win. Kokrak picked up nearly four strokes on the field on the greens in the final round and more than 10 strokes overall, to lead the field in that stat. According to Bettinardi, Kokrak prefers the compact mallet shape and weight at 358 grams.

Not that Kokrak’s ballstriking should be overlooked as he ranked second in greens in regulation as he hit 77.8 percent of greens with his PXG 0311T irons. The irons use an interior design the company calls “impact reactor” where a soft internal polymer reduces unwanted vibrations while the overall system was softened to transfer more energy to the ball. Kokrak signed with PXG for the 2020 season.

Which is a nice return for PXG, but not quite as nice as the $1.755 million Kokrak took home. A number that, finally, is no longer added to his non-winning total.

Apologies to the rest of the RSM field, but the whole golf world is rooting for Camilo Villegas
Los 8 Fundamentos del Swing | GOLF TIPS
Take A Lesson With Me! // Takeaway & Connection Drills
Popov masters wind, leads LPGA event after 64
Rory Sabbatini has become the PGA Tour’s transcontinental man of mystery